Daughter of the Pirate King by Tricia Levenseller - Book Review 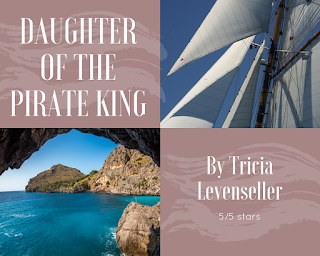 Synopsis: Sent on a mission to retrieve an ancient hidden map—the key to a legendary treasure trove—seventeen-year-old pirate captain Alosa deliberately allows herself to be captured by her enemies, giving her the perfect opportunity to search their ship.
More than a match for the ruthless pirate crew, Alosa has only one thing standing between her and the map: her captor, the unexpectedly clever and unfairly attractive first mate, Riden. But not to worry, for Alosa has a few tricks up her sleeve, and no lone pirate can stop the Daughter of the Pirate King.

Wow! This book was GOOD! No, not good, but AMAZING! It is definitely one of my all-time favorite books! I recently finished the second one in this duolagy (why is this a duolagy instead of a full-blown, nine novel series) and it was also AMAZING! I haven't read any pirate books before this one, so I am searching for more! If you have a recommendation, comment!!!

Here is the spoilery part!

I couldn't believe Alosa was half-siren. I wish I was that amazing! I am so proud of her for finding that map. Who else is in love with Riden?

If you have read the sequel:

I need a third book! I can't believe she finally embraced her love for Riden! Her being half-siren was such a large aspect of the story!