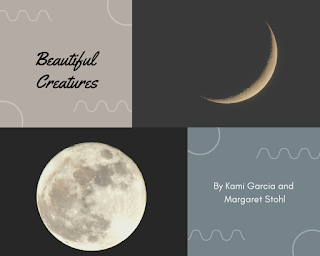 Synopsis: Lena Duchannes is unlike anyone the small Southern town of Gatlin has ever seen, and she's struggling to conceal her power, and a curse that has haunted her family for generations. But even within the overgrown gardens, murky swamps and crumbling graveyards of the forgotten South, a secret cannot stay hidden forever.
Ethan Wate, who has been counting the months until he can escape from Gatlin, is haunted by dreams of a beautiful girl he has never met. When Lena moves into the town's oldest and most infamous plantation, Ethan is inexplicably drawn to her and determined to uncover the connection between them.In a town with no surprises, one secret could change everything

5/5 stars! This book had me hooked from the very first page! The romance was perfect! The history, phenomenal! The characters and world-building are to die for! There were so many surprises and the plot was unbelievably good! I was dead inside when I finally closed the book. This was an AMAZING book and everyone should read it! I NEED THE SEQUEL TO SURVIVE!

I was originally spoiled by my friend that Macon was going to die. But it wasn't a big issue because ETHAN DIED FOR A SECOND! And poor Boo! The magic was a great plus to the story and the connection between Ethan and Lena was wonderful. Sarafina is as bad as Umbridge in my opinion. She was heartless and did not care if others got hurt. On the other hand, Amma is AMAZING!

That is it for now! If you enjoyed,  to join the bookish fun!