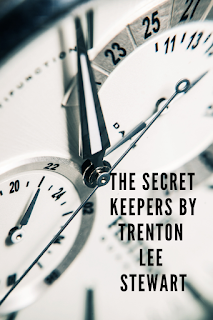 Synopsis: A magical watch.
A string of secrets.
A race against time.When Reuben discovers an extraordinary antique watch, he soon learns it has a secret power and his life takes an intriguing turn. At first he is thrilled with his new treasure, but as one secret leads to another, Reuben finds himself torn between his innately honest nature and the lure to be a hero.Now he is on a dangerous adventure--full of curious characters, treacherous traps, and hairsbreadth escapes--as he races to solve the mystery before it is too late. Even with fearless Penny, mighty Jack, and the wise Mrs. Genevieve on his side, can Reuben outwit and outmaneuver the sly villain called The Smoke and his devious defenders the Directions and save the city from a terrible fate?

4/5 stars! There were plenty of twists and turns and who knows what else, but the idea behind the watch and its secrets. Reuben was a wonderful main characters and so was Penny. I love the history behind Penny and Jack's family. Mrs. Genevieve was a wonderful plus to the story.

That is it for now! If you enjoyed,  to join the bookish fun!