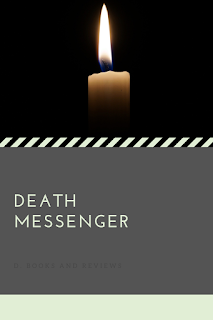 Hey Everyone! I was contacted by the author to write a COMPLETELY HONEST review on his book, The Death Messenger! So here is the review! (No spoilers for this review at any point)!

Synopsis (via Goodreads): "A message is delivered, the death answers his friend, both are connected."
Westcliffe Patel is in his early thirties, living alone with a decent job in a small town. When he just began to have a glimpse of joy, he has a car accident. And thereafter, a whisper of sinister voice haunted him—telling him a message. Assuming it is just an illusion or the effect from the accident, he continues his accustomed life. But when the ominous message is confirmed by the death of his friend—the unexplained death mystery quickly clings to his mind...Besides, the death has confirmed his imaginary demon which he thought ain't real. He soon receives the death message of his girlfriend, he has no choice but just to dive deeper to investigate before he could avert his girlfriend from becoming a victim. How can Westcliffe stop the demon when he has never met it? Consequently, his life is never the same again.

I gave this book 4/5 stars! It was full of suspense and at most points, I was literally at the edge of my seat! I couldn't believe what happened at some parts and the twists and turns made me fall out of my chair. The story was unbelievable and intense. I did have some grammatical issues and at first, it was hard to get into but the rest of the story made up for that! Overall, I recommend it to everybody (I even made my dad read it)!

Hope you enjoyed! Have you read this book?
So long,
D.
Email Post
Labels: Book Reviews