Three Posts in One! 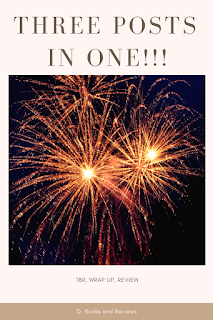 Hello! I come in peace! It has been so long! I have been sick and busy and I just haven't been able to post! Now I am back and searching for a day I can dedicate too posting! If you have any recommendations, comment! Anywho! Today I am gonna do a Book Review, A Wrap-Up, and my TBR! And as a bonus a mini book haul! Good luck!

Today, I am going to review Knight by Addison Carmichael!
*I was sent a copy to review. All opinions are my own and completely honest*

Synopsis (via Goodreads): Alexia Raine has a major problem--she’s being stalked by very dangerous men for some unknown reason, but one that will turn her entire world on its axis.

Neil Duran has five major problems: Just when he’s closing in on a vicious werewolf hunter that is kidnapping, torturing and killing their people, he’s pulled from the case by his High Alpha, Rob Bryant, to locate and return the daughter of their most valuable and gifted shifter. If he doesn’t, their entire Wolf Pack in the Pacific Northwest might collapse and lose all hard-won territory, shifting the balance of powers and throwing the entire were-kind species into a world war.

Problem one—Alexia Raine never knew her real father.
Problem two—She doesn’t even know that shifters or were-kind exist.
Problem three—Their rival Pack wants her and will stop at nothing to acquire her for several unspeakable reasons.
Problem four—She’s the most aggravating, infuriating, intoxicating woman he’s had the displeasure to rescue. And he may very well be falling in love with her.
Problem five—A wolf always finds and protects his mate.

This book was a fun entertaining book with interesting characters and an awesome world. This book was definitely better than the Prequal. I enjoyed my experience reading it and I can see myself continuing with the series.

I went book shopping recently and bought a few books!

So what if I was on a book buying ban, Hahaha! I enjoyed myself that day.

Here are the books I read!

Beauty and Her Beast by Addison Carmichael (Review Posted)

Sons of the Alpha: KNIGHT by Addison Carmichael (Review above)

Here are the books I want to read!

And that is it! Have you read any of these books?
So long!
~D.
Email Post
Labels: Book Hauls Book Reviews Monthly TBR Monthly Wrap-Ups