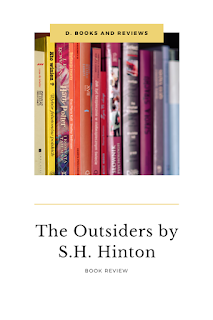 Synopsis(via Goodreads): The Outsiders is about two weeks in the life of a 14-year-old boy. The novel tells the story of Ponyboy Curtis and his struggles with right and wrong in a society in which he believes that he is an outsider. According to Ponyboy, there are two kinds of people in the world: greasers and socs. A soc (short for "social") has money, can get away with just about anything, and has an attitude longer than a limousine. A greaser, on the other hand, always lives on the outside and needs to watch his back. Ponyboy is a greaser, and he's always been proud of it, even willing to rumble against a gang of socs for the sake of his fellow greasers--until one terrible night when his friend Johnny kills a soc. The murder gets under Ponyboy's skin, causing his bifurcated world to crumble and teaching him that pain feels the same whether a soc or a greaser.

Hello everyone! Here is one of the anticipated book reviews! I read this for school and I was a little apprehensive when I found out we were going to read it for my English class. When we started I thought it was ok because I love plot AND characters to work together in a novel not just one or the other. But as the story really went forward, I fell into an intense hole where I just wanted to read this book but of course I had to read it with the class. We read it bit by bit until we got to a part... THE PART! This scene leads to many chain reactions and the relationship between two of the characters (Pony and Johnny). The whole cast of characters, in general, were so wonderful. Ponyboy is literally one of my new fictional boyfriends! He is so sweet and... golden... and ahhh I love him! Darry is a very interesting character and just intrigues me. Sodapop is also amazing! He sounds the cutest and the story with him and Mickey Mouse made his character more developed. Two-Bit sounds like that friend who would always get you in trouble but would be there for you at any moment. Dally is honestly scary but caring at the same time! He cared for Johnny so much it resulted in a huge scene. Steve seemed to be very strange but still chill. And last but not DEFINITELY NOT LEAST Johnny! He was such a sweetheart and I love him so much he was so innocent in a sense and I hate his parents with a passion. The plot at first was on the eh side until the very important moment which made the book more action packed! I gave it 3/5 stars!
Well, that is it! I hope you enjoyed! Did you read this book?
So long,
~D.