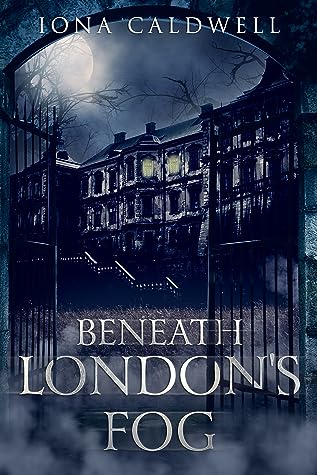 *I was sent a copy by the Publisher for an honest review, all thoughts are mine and mine alone*

Hey everyone! Here is the review for Beneath London's Fog!
Currently Reading:
The Novice by Taran Matharu
1984 by George Orwell

Synopsis: Jonathan is the immortal master of Raven Hollow Manor - a decrepit mansion riddled with superstition, murder and restless ghosts. Beneath it lies a restless malice.
Its previous owner driven mad, violently kills his guests with a rusted ax, creating the perfect venue for Jonathan to seclude himself in a prison of his own device.When the streets of London begin to run red with blood; the bodies exhibiting disturbing signs and baffling wounds, the identity of the killer remains elusive to police.The bodies are just the beginning of Jonathan's troubles. A mysterious letter accusing Jonathan of committing the murders appear, raising suspicion in the police. Hidden beneath the mangled bodies, Jonathan soon realizes he is being forced to face demons he thought died in a forlorn past he attempted to escape. One thing Jonathan knows for certain: He must deal with the demons of his past if he is to survive his future. Not only him but those he has come to love as well.

I thought the world, even though it is in a modernish setting, was well done. I loved being surrounded by London and its alleys and secrets and the horrors that take place during this book.Characters

I loved Holly and Anna and everyone else but those two were my favorite out of everyone! I did feel like there was too much telling and there could have been more showing as they say. Plot

I thought the story was very fun and perfect for this time of year with its vampires and ghouls! I enjoyed it overall!Backstory

I loved the flashbacks! I think they gave us a better idea of the whole storyline overall! I also think they were a great way to tell the story.
Magic System

I loved the vampires and how they were represented! I think Jonathan's way of feeding is much more reasonable than how the other vampires feed. I also think their powers are a little plot convenient but I think it goes well this story!Romance

I loved Anna and Jonathan and how deeply he cared! I feel like if the bad thing didn't happen, they would have developed beautifully!

Also, Holly and Walter were too "love at first sight". I think they should have developed a bit more and had been shown a little better but I thought they were cute.

Iona Caldwell is a new author ready to begin her publishing journey with her stand-alone novella. As an author, Iona hopes readers will bond with her stories through some of the basic tools in a horror/occult fiction author's box - suspense, tension, and fear. When she is not writing, Iona devotes her time giving back through a love of sustainability, book reviews, and blogging.

I hope you enjoyed! What are you currently reading? What posts do you want to see for Bookmas this year? Do you want to read this book? Have you read it? If so, what are your thoughts?